Again on Philips CD670 and the CDM/2 cd transport


During the last year BOTH my Philips CD670 cd players have began to express annoying symptoms:

Those symptoms led me to think I was facing a tracking problem, so I started investigating the servo controller board.
To make a long story short, here is the result: BOTH players showed the same problem: a crack in the same point of the same strip of the flat ribbon PCBs inside the CDM2. Certainly a design flaw that  manifested itself years and years after production.

The problem is due to the clip keeping the tape in place in the CDM2 frame.
This clip is designed in such a way that it pushes on the tape not in a uniform manner, but on the two outside edges. After years of little stress,  the underlying ribbon strip starts to have continuity problems and eventually breaks.
This is emerging as a potential recurring problem which can affect many CDM2 still out there and can also be the cause of the bad reliability reputation of the CDM2.
Some self explanatory pictures follow.

I also add some pic and information gathered during the troubleshooting process.

The culprits (item 51 in the exploded view in the service manual). 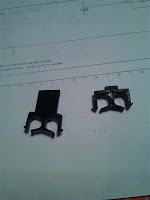 The fix on first player 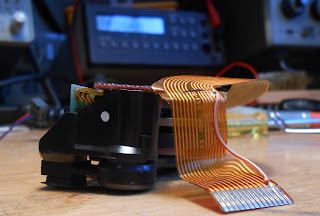 The fix on second player 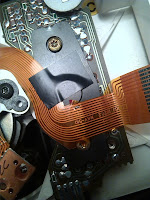 Laser current test point - first player
A socket has been installed to facilitate future measurements. The service manual states that 50mV should be present across resistor 3102. The pot was set for 45mV to preserve laser life. 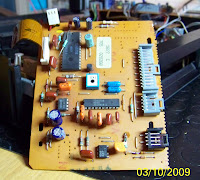 Laser current test point - second player
There is non need to install sockets here. Jumpers are available on the other side of the PCB that are connected to resistor 3102... 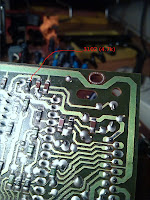 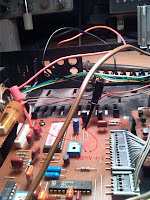 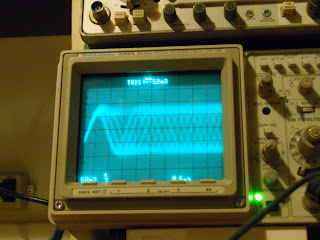 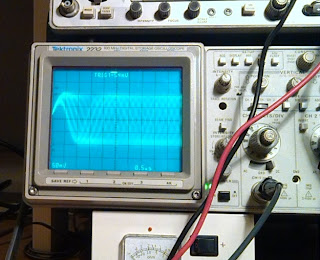 Jitter of master clock. Similar on both players... 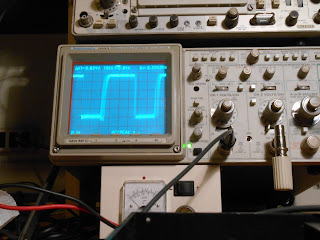 Useful to know: the cd-660/670 players have service modes available for troubleshooting.
Turn on the player while  simultaneously depressing FTS + TRACK< + TRACK>. The player starts in service mode 0 showing a 0 on the display. SM 0 is a sort of standby mode you can use to check various static signals and voltages.
Pressing TRACK> the uP tries to reach service mode 1. SM 1 is still a standby mode, but the focus has been set up. If the player is not able to reach SM 1, the a focus servo subsystem has to be investigated. To reach SM 1 a disk has to be present in the player. With no disk in the player you can monitor the 16 attempts the uP performs to get focus: useful to track both mech and electrical problems. As in SM 1 the laser is turned on I use this mode to adjust the laser current.
Press TRACK> again to reach SM 2. Spindle motor is now on focus is kept but tracking is still disabled.
Press TRACK> again to reach SM 3 where tracking is turned on. Players stay in SM 3 for about 60sec then jump back to SM 0.

Do you have found this information useful? Please support my effort. Thank you!

I was having fun performing some modulation measurements on my sig-gen (HP8640B) by using my R3361B as a modulation analyzer ...when started...